Electric charge is the property responsible for electric forces which act between nucleus and electron to bind the atom together. Electric charge is a fundamental property like mass, length etc associated with elementary particles for example electron, proton and much more. 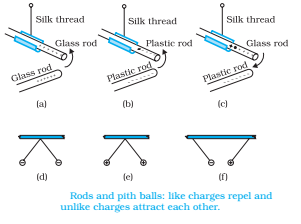 Charges add up like real numbers i. e., they are Scalars more clearly if any system has n number of charges q1, q2, q3, qn then total charge of the system is

then the total charge of the system is