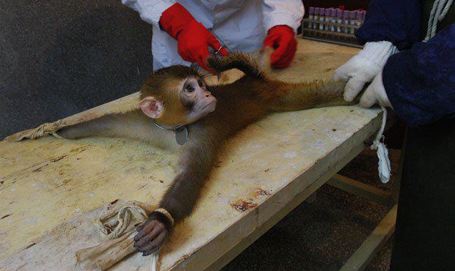 World Lab Animal Day, also known as World Day for Animals in Laboratories or World Day for Laboratory Animals, is an annual global day officiating at April 24. It was accepted by the National Anti-Vivisection Society (NAVS) based in the United Kingdom in 1979. World Lab Animal Day focuses on raising awareness about cruel animal tests and their advanced non-animal alternatives that are more effective and reliable and do not result in the death of living creatures.

The day April 24 was selected because it marked the birthday of Hugh Dowding, British Air Chief Marshal who was a devoted anti-vivisectionist.
According to statistics provided by NAVS, every year approximately 100 million animals suffer and die in laboratories, although there are advanced alternatives that can replace tests on animals.
World Day for Laboratory Animals is marked by protests, demonstrations, rallies, conferences, media events against the use of animals in research. The surrounding week is referred to as World Week for Animals in Laboratories, Lab Animal Week or World Laboratory Animal Liberation Week.
For more details about World Lab Animal Day you can follow world day for laboratory animals site.