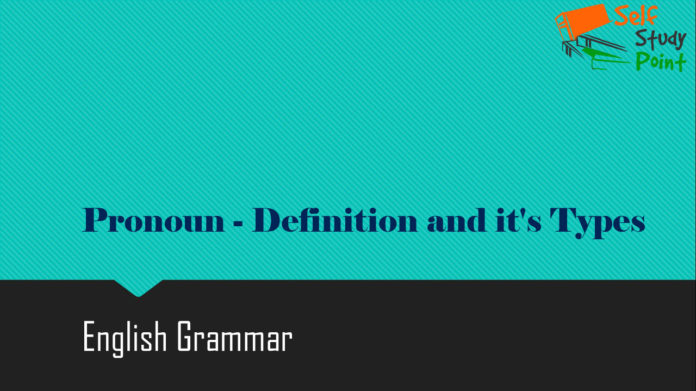 Ram went to his house because his mom wanted him home.

Now you can see in the second sentence that sentence is about subject. You only use Ram one time, even make the sentence is about him. The words that can be used in place of the noun, are Pronoun. They minimize redundancy in language.

Pronouns are words that take the place of nouns.

Or in simple words, the words that can be used in place of nouns, are pronouns.

The pronouns that replace subjects of sentences are Subject Pronouns. Let see below sentences for reference.

In the first sentence, Rohit is subject. Which is replaced with the pronoun in the second sentence. This is a subject pronoun.

The pronouns that replace objects of sentences are Object Pronouns. Let see below sentences for reference.

In the first sentence, Jack and Jill are objects. Which is replaced with the pronoun in the second sentence. This is an object pronoun.

Pronouns have diiferent words for their subjective and objective case. Some of them are mentioned below:

Let us readout the followig sentence.

Anil saw Anil in the mirror.

You might think, what kind of this sentence. It’s out of universe. Now again rewrite the same sentence.

Anil saw himself in the mirror.

Now, the sentence makes sense. You can see the use of pronoun make the sentence more readable. The pronoun that expresses their selfness of the subjects or objects is Reflexive Pronoun.  All the reflexive pronouns end in -self (singular) or -selves (plural).

The reflexive pronouns are: myself, yourself, himself, herself, itself, ourselves, yourselves, themselves.

Pronouns have different words as per their position in the sentence. Similarly, pronouns are different for the person.
If two persons are talking then the speaker is the First person. The listener is the Second person. About whom the first person is talking is the Third person.

When a pronoun is use to demonstrate something, its Demonstrative Pronoun. You can replace these with noun. Like above sentence rewrite as:

Here Burger and Pizza is replaced. Such words are Demonstrative Pronouns.

There are only four demonstrative pronouns: this, that, these, and those.

Possessive pronouns are pronouns that indicate possession, or ownership.

Interrogative pronouns are question words. Look for the question mark to help find them.

The interrogative pronouns are: how, what, when, where, which, who, whom, whose, why.

The pronoun that relates or replaces the noun that is already use in the same sentence. Look into above sentence, it will make clear. Relative pronouns are usually used in combined sentence. Such sentences are made by combing two sentences. They are mostly same as interrogative pronouns but not have a question mark at the end of the sentence.

The common relative pronouns are: that, which, who, whom, whose. They refer back to a noun in the sentence.