Fructose is an important ketohexose. It is obtained along with glucose by the hydrolysis of disaccharide, sucrose. 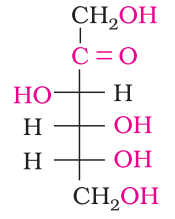 Comparison of Glucose and Fructose