Mathematically, angular momentum is the cross-product of the position vector and the linear momentum, both measured in an inertial frame of reference.

The magnitude of the angular momentum vector is

where, V is linear speed, θ is the angle between r and P

The direction of the angular momentum can be determined by the Right-Hand Rule.

The units of angular momentum in S.I system are kgm2/s or Js.

Relation between Torque and Angular Momentum

Prove that the rate of change of angular momentum is equal to the external torque acting on the body.

Proof:- We know that rate of change of linear momentum is equal to the applied force.

Where P = mv is a linear momentum of the particle.

Taking the vector product of r with both sides, we get

Now, according to the definition of angular momentum

Taking derivative w.r.t time, we get 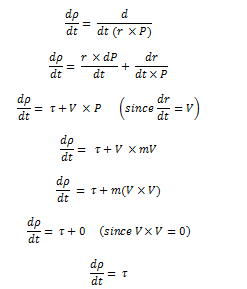 Or, Rate of change of Angular Momentum = External Torque (Proved).

According to the law of conservation of angular momentum, if the external torque (couple) acting on a system is zero, the total angular momentum of a rigid body or a system of particles is conserved.