The motion of a rigid body, in general, is a combination of rotation and translation. If the body is fixed at a point or along a line, it has only rotational motion. We know that force is needed to change the translational state of a body, i.e. to produce linear acceleration. The rotational analogue of force is the moment of force. It is also referred to as torque.

Torque is the physical quantity which produces angular acceleration in the body. 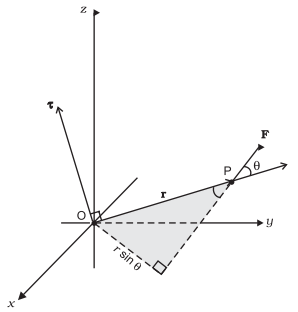 Torque = the cross-product of displacement r and force F

If the line of action of force passes through the axis of rotation then this force cannot produce torque.

The direction of torque can be found by using Right Hand Rule and is always perpendicular to the plane containing r & F. Thus

The unit of torque is Nm. Torque is a vector. Moment of force has dimension M L2 T-2. Its dimensions are the same as those of work or energy.