In other word, binding energy is the energy which should be supplied to the nucleus in order to break it up into its constituent particles.

It is the ratio of the binding energy of a nucleus to the number of the nucleons.

For example, let us consider; a nucleus which has 8 neutrons and 8 protons.

The atomic mass of found from mass spectroscopy experiments is seen to be 15.99493 u. Subtracting the mass of 8 electrons (8 × 0.00055 u) from this, we get the experimental mass of nucleus to be 15.99053 u.
Thus, we find that the mass of the 16 😯 nucleus is less than the total mass of its constituents by 0.13691u. The difference in mass of a nucleus and its constituents, ΔM, is called the mass defect and is given by

This energy required Eb is related to the mass defect by

If a certain number of neutrons and protons are brought together to form a nucleus of a certain charge and mass, an energy Eb will be released in the process. The energy Eb is called the binding energy of the nucleus.

Binding Energy Curve and its Features 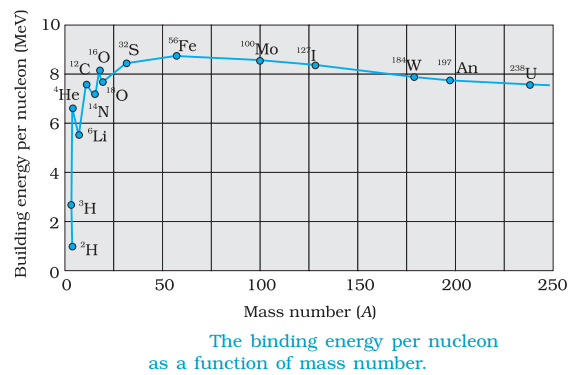