Calorimetry means the measurement of heat. When a body at higher temperature is brought into contact with another body at a lower temperature, the heat lost by the hot body is equal to the heat gained by the colder body, provided no heat is allowed to escape to the surroundings. A device in which heat measurement can be made is called a calorimeter.

Matter exists in three states: solid, liquid and gas. Any state of a substance can be changed into another by heating or cooling it. The transition of a substance from one side to another is called a change of state. 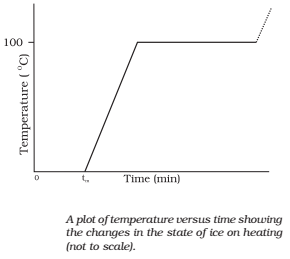 The common changes of states are as follows

Effect of pressure on the boiling point of a liquid:

The temperature at which the liquid and the vapour states of the substance coexist is called its boiling point.

Let us do the following actions to understand the process of boiling of water.

Take a round-bottom flask, more than half filled with water. Keep it over a burner and fix a thermometer and steam outlet through the cork of the flask (Fig.) 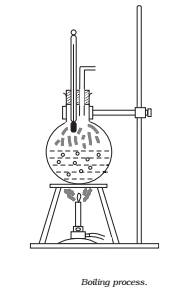