Chemicals are added to food for

Main categories of food additives are as follows:

Except for chemicals of category (vii), none of the above additives has nutritive value.

Sucrose and fructose are the most widely used natural sweetners. Since they add to our calorie-intake and promote tooth decay, therefore, many people use artificial sweeteners. For example, saccharin, aspartame, alitame, sucralose, cyclamate and L-glucose.

Its appearance and taste are like sugar. It is stable at cooking temperature. 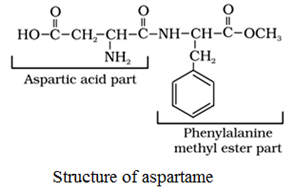 Use of aspartame is limited to cold foods and soft drinks because it is unstable at cooking temperature.