Coherence is attained when there is a constant phase difference in two or more waves over time. 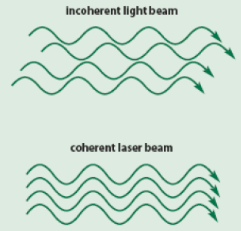 The light produced by lasers is coherent light.

Incoherent light contains many different wavelengths due to which it is scattered. An example is the light from fire which emerges in every direction.