Colligative: from Latin. = Co mean ‘together’; ligare means ‘to bind’.

Colligative properties are those properties which depend only upon the number of solute particles in a solution irrespective of their nature. 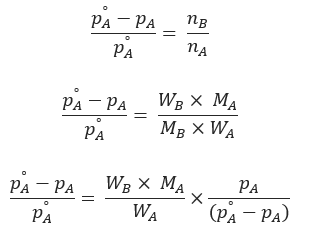 Ostwald and walker method is used to determine the relative lowering of vapour pressure.

Kb is molal elevation constant or ebullioscopic constant. Molecular mass of solute can be calculated as

The boiling point elevation of a solution is determined by

The freezing point of a liquid is the temperature at which its vapour pressure of the solvent in its liquid and solid phase become equal. As we know that vapour pressure of a solution containing nonvolatile solute is lower than that of the pure solvent, the solid form gets separated out at a lower temperature as shown in the figure. 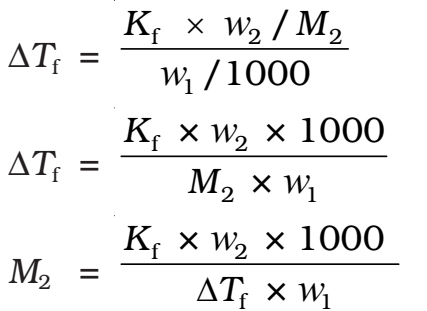 Thus, for determining the molar mass of the solute we should know the quantities w1, w2, ΔTf, along with the molal freezing point depression constant.
The values of Kf and Kb, which depend upon the nature of the solvent, can be ascertained from the following relations.