Collision between two or more particles is the interaction for a short interval of time in which they apply relatively strong forces on each other.

We shall study the collision of two masses in an idealized form. Consider two masses m1 and m2 The particle m1 is moving with speed v1i , the subscript ‘i’ implying initially. We can consider m2 to be at rest. No loss of generality is involved in making such a selection. In this situation, the mass m1 collides with the stationary mass m2 and this is depicted in Fig.

Fig.1. The collision of mass m1 , with a stationary mass m2.

The masses m1 and m2 fly-off in different directions. We shall see that there are relationships, which connect the masses, the velocities, and the angles.

There are two types of collisions:

Elastic collision in one dimension:

If the two bodies after collision move in a straight line, the collision is said to be of one dimension. 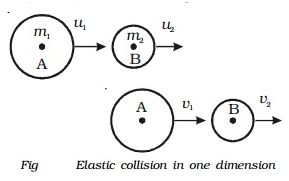 From the law of conservation of linear momentum, 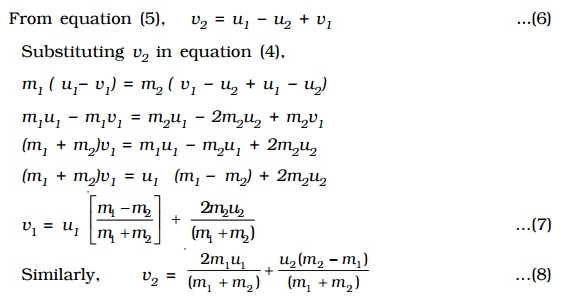 After a head on elastic collision, the velocities of the colliding bodies are mutually interchanged.

We regain this equation eq. (1) for one dimensional equation.

If, further the collision is elastic,

We obtain an additional equation. That still leaves us one equation short.