Removal of the unwanted materials (e.g., sand, clays, etc.) from the ore is known as concentration, dressing or benefaction. It involves several steps and selection of these steps depends upon the differences in physical properties of the compound of the metal present and that of the gangue.

Some of the important procedures are described below:

This is based on the differences in gravities of the ore and the gangue particles. It is, therefore, a type of gravity separation. In one such process, an upward stream of running water is used to wash the powdered ore. The lighter gangue particles are washed away and the heavier ores are left behind.

This is based on differences in magnetic properties of the ore components. If either the ore or the gangue (one of these two) is capable of being attracted by a magnetic field, then such separations are carried out (e.g., in case of iron ores). The ground ore is carried on a conveyer belt which passes over a magnetic roller (Fig.) 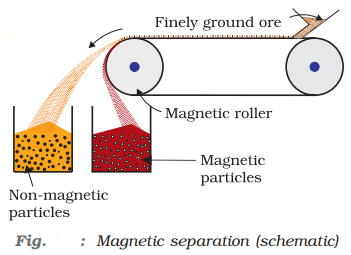 This method is commonly used for the concentration of the low-grade sulphide ores like galena, PbS (ore of Pb); ZnS (ore of zinc) etc. and is based on the fact that gangue and ore particles have different degree of wet ability with water and pine oil; the gangue particles are preferentially wetted by water while the ore particles are wetted by oil. In this process one or more chemical frothing agents are added. 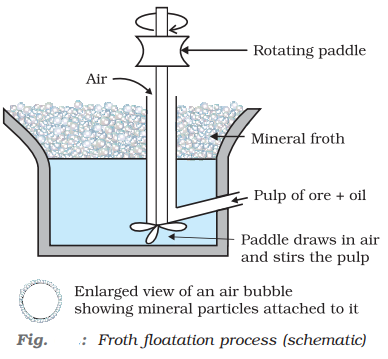 Leaching is often used if the ore is soluble in some suitable solvent. For example, Bauxite is leached with a hot concentrated solution of NaOH which dissolves aluminium while other oxides like Fe2O3, SiO2, etc., remain undissolved. The following examples illustrate the procedure:

Leaching of alumina from bauxite:

In the metallurgy of silver and that of gold, the respective metal is leached with a dilute solution of NaCN or KCN in the presence of air (for O2).