It is the reciprocal of resistance and may be defined as the ease with which the electric current flows through a conductor.

The electronic conductance depends on:

It is the reciprocal of resistivity (k).

Now if l = 1 cm and A = 1 cm2, then k = G.
Hence, the conductivity of an electrolytic solution may be defined as the conductance of a solution of 1 cm length with the area of cross-section equal to 1 cm2.

The conductivity of electrolytic (ionic) solutions depends on:

Electrolyte: An electrolyte is a substance that dissociates in solution to produce ions and hence conducts electricity in the dissolved or molten state.

The value of k could be known, if we measure l, A and R. The value of the resistance of the solution R between two parallel electrodes is determined by using Wheatstone’s bridge method (Fig.)

It consists of two fixed resistance R3 and R4, a variable resistance R1 and the conductivity cell having the unknown resistance R2. The bridge is balanced when no current passes through the detector. Under these conditions

It may be defined as the conducting power of all the ions produced by dissolving one mole of an electrolyte placed between two large electrodes at one centimetre apart.
Mathematically,

where V is the volume of solution in cm3 containing 1 mole of electrolyte and C is the molar concentration.

It is conducting power of one equivalent of electrolyte placed between two large electrodes at one centimeter apart.

Where v is the volume of solution in cm3 containing 1 equivalent of electrolyte and N is normality.

It has been found that the decrease in on dilution of a solution is more than compensated by increases in its volume.

Graphic representation of the variation of ʌm vs c1/2 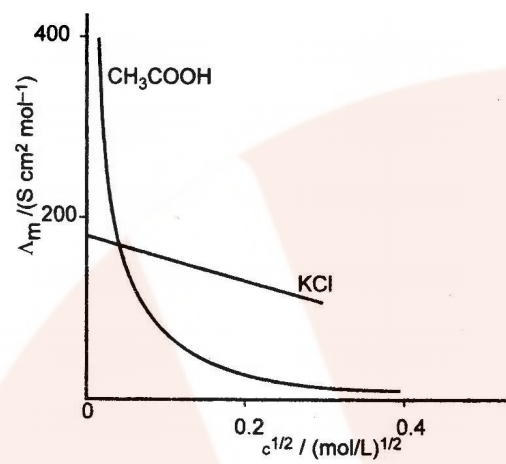