Diffraction is the slight bending of light as it passes around the edges of an object. The amount of bending depends on the relative size of the wavelength of light to the size of the opening. If the opening is much larger than the light’s wavelength, the bending will be almost unnoticeable. However, if the two are closer in size or equal, the amount of bending is considerable, and easily seen with the naked eye.

Waves diffract when they encounter obstacles. Why does this happen? If we apply Huygens principles it becomes clear. Think about a wavefront impinging on a barrier with a slit in it, only the points on the wavefront that move into the slit can continue emitting forward moving waves- but because a lot of the wavefront has been blocked by the barrier, the points on the edges of the hole emit waves that bend round the edges. 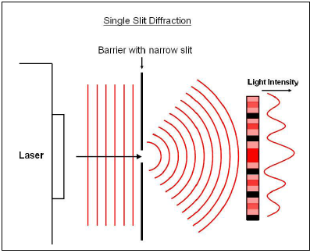 Effect of Slit Width and Wavelength on Diffraction Patterns 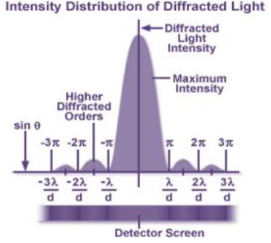 Difference between Interference and Diffraction 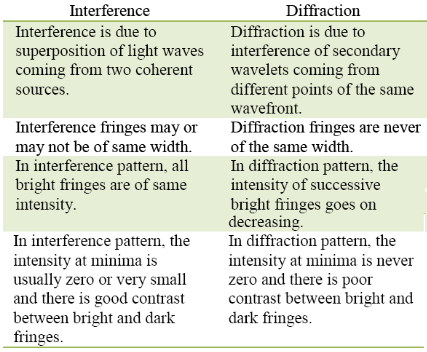 In interference and diffraction, light energy is redistributed. If it reduces in one region, producing a dark fringe, it increases in another region, producing a bright fringe. There is no gain or loss of energy, which is consistent with the principle of conservation of energy.

The resolving power of the microscope is given by the reciprocal of the minimum separation of two points seen as distinct.

The resolving power can be increased by choosing a medium of higher refractive index. Usually oil having a refractive index close to that of the objective glass is used. Such an arrangement is called an ‘oil immersion objective’. It is not possible to make sinβ larger than unity. Thus, we see that the resolving power of a microscope is basically determined by the wavelength of the light used.