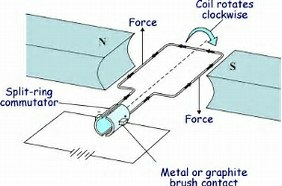 It is an instrument that can detect the presence of a current in a circuit.

If pointer is at zero (the centre of scale) then there will be no flow of current. If the pointer deflects on either side right or left, this will show the direction of current. Represented by

Electric power can be transmitted to longer distances without much loss of energy. Therefore, cost of transmission is low.

In India the frequency of AC is 50Hz. It means after every 1/100 second it changes its direction.