There are three distinct modes of heat transfer: 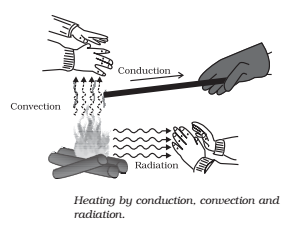 Conduction is the mechanism of transfer of heat between two adjacent parts of a body because of their temperature difference.

Suppose one end of a metallic rod is put in a flame, the other end of the rod will soon be so hot that you cannot hold it with your bare hands. Here heat transfer takes place by conduction from the hot end of the rod through its different parts to the other end. Gases are poor thermal conductors while liquids have conductivities intermediate between solids and gases. 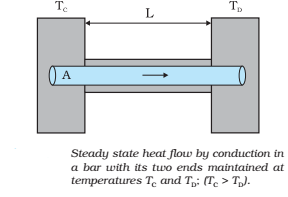 The constant of proportionality K is called the thermal conductivity of the material.

It is a mode of heat transfer by actual motion of matter. It is possible only in fluids convection can be natural or forced. When a fluid is heated from below, the hot part expands and, therefore, become less dense.

If the material moves due to the difference in density, the process of heat transfer is called natural or free convection. In natural convection, gravity plays an important part. Natural convection is responsible for the origin of different types of winds in the atmosphere.

If the heated material is forced to move by an agency like a pump or a blower, the process of heat transfer is called forced convection. Air-conditioning, central heating systems and heating a liquid by brisk stirring are examples of forced convection.

Radiation is the process by which heat is transmitted from one place to another without heating the interviewing medium.