When a charged capacitor is allowed to discharge through a non-resistance, electrical oscillations of constant amplitude and frequency are produced. These oscillations are called LC-oscillations. 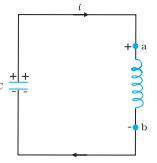 Fig. At the instant shown, the current
is increasing so the polarity of induced emf in the inductor is as shown

This equation has the form for

a simple harmonic oscillator. The charge, therefore, oscillates with a natural frequency.

And varies sinusoidally with time as

Figure (a) shows a capacitor with initial charge qm connected to an ideal inductor. The electrical energy stored in the charged capacitor is

.Since, there is no current in the circuit; energy in the inductor is zero. Thus, the total energy of LC circuit is