Junction Diode as a rectifier

The process in which alternating voltage or alternating current is converted into a direct voltage or direct current is known as rectification. The device used for this process is called as a rectifier. The junction diode has the property of offering low resistance and allowing current to flow through it, in the forward biased condition. This property is used in the process of rectification.

A circuit which rectifies half of the a.c wave is called half wave rectifier. 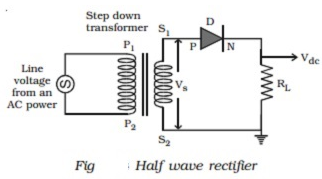 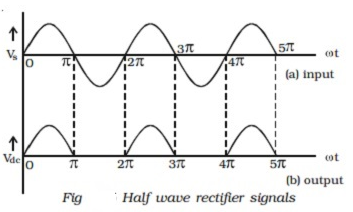 During the positive half cycle of the input a.c. voltage Vs, S1 will be positive and the diode is forward biased and hence it conducts. Therefore, current flows through the circuit and there is a voltage drop across RL. This gives the output voltage as shown in Fig.

During the negative half cycle of the input a.c. voltage (Vs), S1 will be negative and the diode D is reverse biased. Hence the diode does not conduct. No current flows through the circuit and the voltage drop across RL will be zero. Hence no output voltage is obtained. Thus corresponding to an alternating input signal, the unidirectional pulsating output is obtained.

The ratio of d.c. power output to the a.c. power input is known as rectifier efficiency. The efficiency of half wave rectifier is approximately 40.6%. 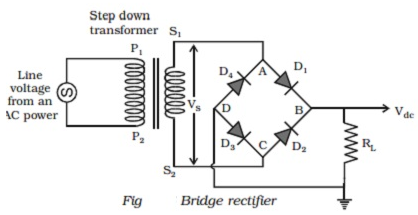 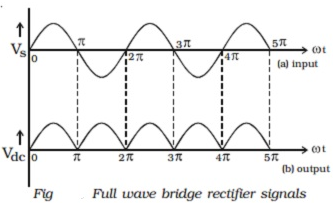 PN Junction Diode as a rectifier