If one side of a single crystal of pure semiconductor (Ge or Si) is doped with acceptor impurity atoms and the other side is doped with donor impurity atoms, a PN junction is formed as shown in Fig. P region has a high concentration of holes and N region contains a large number of electrons.

When the positive terminal of the battery is connected to P-side and negative terminal to the N-side, so that the potential difference acts in opposite direction to the barrier potential, then the PN junction diode is said to be forward biased. 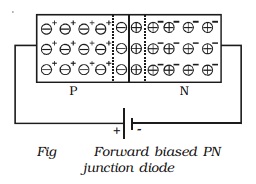 When the positive terminal of the battery is connected to the N-side and negative terminal to the P-side, so that the applied potential difference is in the same direction as that of barrier potential, the junction is said to be reverse biased. 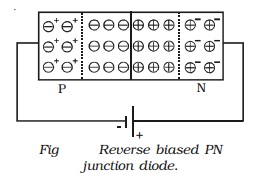 Symbol of a semiconductor diode:

The diode symbol is shown in Fig. The P-type and N-type regions are referred to as P-end and N-end respectively. The arrow on the diode points the direction of conventional current.