It is a coiled structure made up of elastic material & is capable of applying restoring force & restoring torque when disturbed from its original state. When a force (F) is applied at one end of the string, parallel to its length, keeping the other end fixed, then the spring expands (or contracts) & develops a restoring force (FR) which balances the applied force in equilibrium. 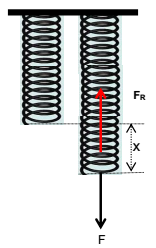 Case 1: If x = 1, FR = k, Hence force constant of the string may be defined as the restoring force developed within spring when its length is changed by unity.

Case 2: If x = 1, F = 1, Hence force constant of the string may also be defined as the force required to change its length by unity in equilibrium. 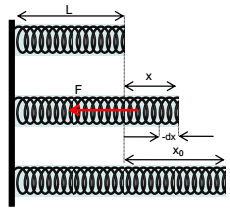 Consider a spring of natural length ‘L’ & spring constant ‘k’ its length is increased by x0. The elastic potential energy of stretched spring will be equal to total work done by the spring in regaining its original length.
If in the process of regaining its natural length, at any instant extension in the spring was x then force applied by spring is
F = k x
If spring normalizes its length by elementary distance dx opposite to x under this force then work done by spring is

This work was stored in the body in the form of elastic potential energy.