Refraction through a Prism:

A ray of light suffers two refractions on passing through a prism and hence deviates through a certain angle from its path.

The angle subtended between the direction of incident light ray and emergent light fay from a prism is called angle of deviation (δ). 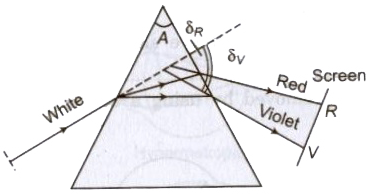 The refractive index of material of prism

The splitting of white light into its constituent colors in the sequence of VIBGYOR, on passing through a prism is called dispersion of light. 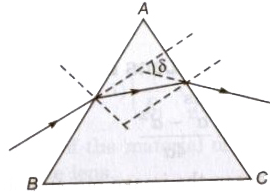 The angle subtended between the direction of emergent violet and red rays of light from a prism is called angular dispersion.

Angular dispersion: Angular Dispersion produced by a prism for white light is the difference in the angles of deviation of 2 extreme colors i.e., violet & red colors.

where δv and δR are the angle of deviation.

The dispersive power of a prism is defined as the ratio of angular dispersion to the mean deviation produced y the prism. It is represented by W.

W depends only on nature of the material of prism while both mean & angular deviation depend on the angle of prism & material of the prism.