At a particular value of the angular frequency, the inductive reactance and the capacitive reactance will be equal to each other (i.e.)

So that the impedance becomes minimum and it is given by Z = R.

The series resonant circuit is often called an ‘acceptor’ circuit. By offering minimum impedance to current at the resonant frequency it is able to select or accept most readily this particular frequency among many frequencies.

where ω0 is the angular frequency of the a.c. at resonance. 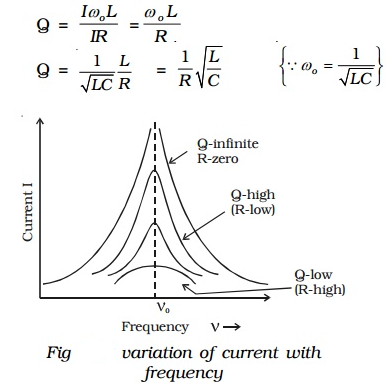 Q is just a number having values between 10 to 100 for normal frequencies. Circuit with high Q values would respond to a very narrow frequency range and vice versa. Thus a circuit with a high Q value is sharply tuned while one with a low Q has a flat resonance. Q-factor can be increased by having a coil of large inductance but of small ohmic resistance.

Current frequency curve is quite flat for large values of resistance and becomes more sharp as the value of resistance decreases. The curve shown in Fig is also called the frequency response curve.