These are the point defects that do not disturb the stoichiometry of the solid. They are also called intrinsic or thermodynamic defects.

Basically these are of two types:

When some of the lattice sites are vacant, the crystal is said to have vacancy defect (Fig.). This results in decrease in density of the substance. This defect can also develop when a substance is heated. 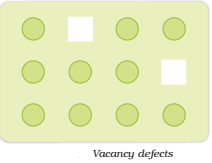 When some constituent particles (atoms or molecules) occupy an interstitial site, the crystal is said to have interstitial defect (Fig.). This defect increases the density of the substance. 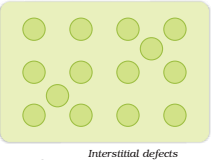 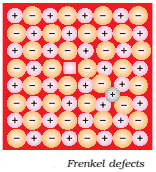 It does not change the density of the solid. Frenkel defect is shown by ionic substance in which there is a large difference in the size of ions, for example, ZnS, AgCl, AgBr and AgI due to small size of Zn2+ and Ag+ ions.

It is basically a vacancy defect in ionic solids. In order to maintain electrical neutrality, the number of missing cations and anions are equal (Fig.). 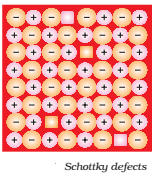 For example, NaCl, KCl, CsCl and AgBr. It may be noted that AgBr shows both, Frenkel as well as Schottky defects.