For rigid bodies, the centre of mass is independent of the state of the body i.e., whether it is in rest or in accelerated motion centre of mass will remain same. 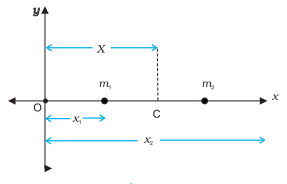 For simplicity, we shall start with a two particle system. We shall take the line joining the two particles to be the x– axis.

Thus, for two particles of equal mass, the centre of mass lies exactly midway between them.

Case 2: If we have n particles of masses m1, m2, …mn respectively, along a straight line taken as the x– axis, then by definition the position of the centre of the mass of the system of particles is given by

where x1 , x2 ,…xn are the distances of the particles from the origin; X is also measured from the same origin. The symbol ∑ (the Greek letter sigma) denotes summation, in this case over n particles. The sum is the total mass of the system.