Thermodynamics is the branch of physics that deals with the concepts of heat and temperature and the inter-conversion of heat and other forms of energy.

Thermodynamics versus the kinetic theory of gases:

Thermodynamics is a macroscopic science. It deals with bulk systems and does not go into the molecular constitution of matter. On the other hand, kinetic theory of gases deals with the molecular distribution of velocities in any gas.

An assembly of a very large number of particles having a certain value of pressure, volume and temperature is called a thermodynamics system.

the quantities like pressure (P), volume (V), and temperature (T) which help us to study the behavior of a thermodynamic system are called thermodynamics variables.

The equation of state:

the mathematical relationship between the pressure, volume and temperature of a thermodynamic system is called its equation of state.

For example, the equation of state for n moles of an ideal gas can be written as,

Equilibrium in mechanics means that the net external force and torque on a system are zero.

Two systems are said to be in thermal equilibrium with each other if they have the same temperature.

Consider two gases A and B occupying two different containers. We know experimentally that pressure and volume of a given mass of gas can be chosen to be its two independent variables. 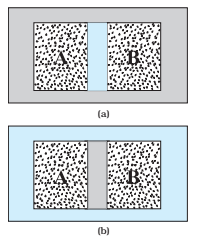 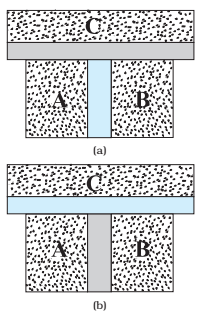