Let us consider a rectangular loop PQRS of length l and breadth b (Fig). It carries a current of I along PQRS. The loop is placed in a uniform magnetic field of induction B. Let θ be the angle between the normal to the plane of the loop and the direction of the magnetic field. 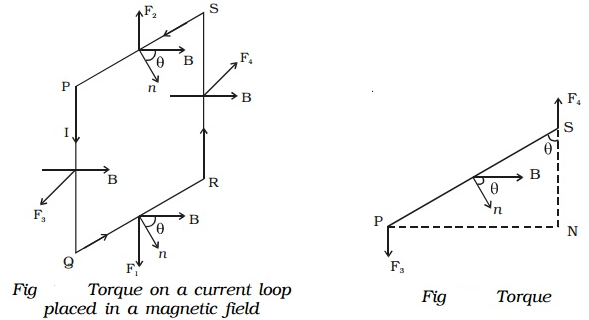 The force F1 and F2 are equal in magnitude, opposite in direction and have the same line of action. Hence their resultant effect on the loop is equal.

F4 acts perpendicular to the plane of the paper and inwards. The forces F3 and F4 are equal in magnitude, opposite in direction and have different lines of action. So, they constitute a couple.

Torque experienced by a current loop in uniform magnetic field