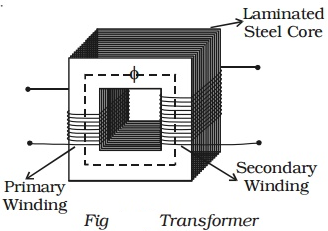 Let ϕ be the flux in each turn in the core at time t due to the current in the primary when a voltage vp is applied to it.

Then the induced emf or voltage , in the secondary with Ns turns is

But εp = vp . If this were not so, the primary current would be infinite since the primary has zero resistance (as assumed). If the secondary is an open circuit or the current taken from it is small, then to a good approximation

where vs is the voltage across the secondary. Therefore, Eqs. (1) and (2) can be written as

Note that the above relation has been obtained using three assumptions: (i) the primary resistance and current are small; (ii) the same flux links both the primary and the secondary as very little flux escapes from the core, and (iii) the secondary current is small.

If the transformer is assumed to be 100% efficient (no energy losses), the power input is equal to the power output, and since p = iv,

Since i and v both oscillate with the same frequency as the ac source.

Now, we can see how a transformer affects the voltage and current. We have:

There are two types of the transformer and they are:

If the secondary coil has less turns than the primary (Ns < Np), we have
a step-down transformer. In this case, Vs < Vp and Is > Ip. That is, the voltage is stepped down, or reduced, and the current is increased.

Efficiency of a transformer

The efficiency of a transformer is defined as the ratio of output power to the input power.

The efficiency η = 1 (ie. 100%), only for an ideal transformer where there is no power loss. But practically there are numerous factors leading to energy loss in a transformer and hence the efficiency is always less than one.

Energy losses in a transformer

The magnetization of the core is repeatedly reversed by the alternating magnetic field. The resulting expenditure of energy in the core appears as heat and is kept to a minimum by using a magnetic material which has a low hysteresis loss.

There is always some flux leakage; that is, not all of the flux due to primary passes through the secondary due to poor designs of the core or the air gaps in the core. It can be reduced by winding the primary and secondary coils one over the other.

The resistance of the windings:

The wire used for the windings has some resistance and so, energy is lost due to heat produced in the wire (I2R). In the high current, low voltage windings, these are minimized by using thick wire.

The alternating magnetic flux induces eddy currents in the iron core and causes heating. The effect is reduced by having a laminated core.