Rutherford proposed a new model of the atom based on Alpha-Particle Scattering experiment.

In 1911, Ernst Rutherford suggested some experiments to H. Geiger and E. Marsden.

Both scientists performed an experiment whose schematic diagram is shown in the figure given.

They directed a beam of 5.5 MeV α-particles emitted from a radioactive source at a thin metal foil made of gold.

Many of the α-particle pass through the foil which means that they do not suffer any collisions. Approximately 0.14% of the incidents α-particles scatter by more than 10 and about 1 in 8000 deflect by more than 900. 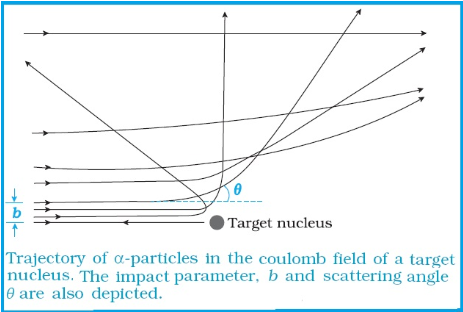 It is the perpendicular distance of the velocity vector of α particle from the central line of the nucleus, when the particle is far away from the nucleus of the atom.

It is the angle made by α particle when it gets deviated from its original path around the nucleus.