Substances, which alter the rate of a chemical reaction and themselves remain chemically and quantitatively unchanged after the reaction, are known as catalysts, and the phenomenon is known as catalysis.

Catalytic reactions can be broadly divided into the following types:

When the reactants and the catalyst are in the same phase (i.e. solid, liquid or gas). The catalysis is said to be homogeneous. The following are some of the examples of homogeneous catalysis.

The reactants, sulphur dioxide and oxygen, and the catalyst, nitric oxide, are all in the same phase.

Both the reactants and the catalyst are in the same phase.

Both the reactants and the catalyst are in the same phase

The reactant is in gaseous state while the catalyst is in the solid state.

The reactants are in gaseous state while the catalyst is in the solid state.

The reactants are in gaseous state while the catalyst is in the solid state.

One of the reactants is in liquid state and the other in gaseous state while the catalyst is in the solid state.

For example, starting with H2 and CO, and using different catalysts, we get different products.

Enzymes are complex nitrogenous substances secreted by low forms of vegetables & organisms. Enzymes are actually protein molecules of higher molecular mass. (ranging from 15,000 – 1,000,000 g/mol) Enzymes form colloidal solutions in water and are very effective catalysts. They catalyse numerous reactions, especially those connected with natural processes. Numerous reactions occur in the bodies of animals and plants to maintain the life process. These reactions are catalysed by enzymes. The enzymes are thus, termed as biochemical catalysts and the phenomenon is known as biochemical catalysis.

Enzyme catalysis is unique in its efficiency and high degree of specificity. The following characteristics are exhibited by enzyme catalysts:

There are a number of cavities present on the surface of colloidal particles of enzymes. These cavities are of the characteristic shape and possess active groups such as -NH2, -COOH, -SH, -OH, etc. These are actually the active centers on the surface of enzyme particles. The molecules of the reactant (substrate), which have complementary shape, fit into these cavities just like a key fit into a lock. On account of the presence of active groups, an activated complex is formed which then decomposes to yield the products.

Thus, the enzyme-catalysed reactions may be considered to proceed in two steps.

Step1: Binding of enzyme to substrate to form an activated complex.

Step2: Decomposition of the activated complex to form product. 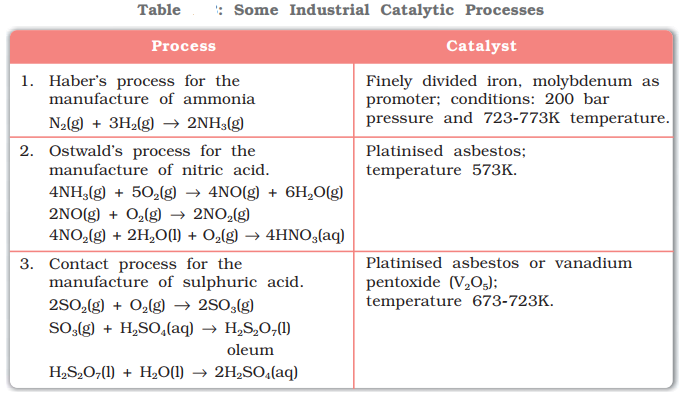