Reactivity of haloalkanes towards nucleophilic substitution:

For the same alkyl group, as we move from F to I, strength of C−X bond decreases, therefore, the reactivity order is:

This reaction has been found to proceed by two different mechanism which are described below:

This type of nucleophilic substitution takes place in one step. The incoming nucleophile interacts with alkyl halide causing the C−X bond to break while forming a new C−OH bond.

The reactivity of alkyl halide towards SN2 reaction is:

This type of nucleophilic substitution takes place in two steps, first step being the rate determining step involves the formation of carbonium ion.

The reactivity order of haloalkanes towards SN1reaction is:

If the light is rotated towards left (anticlockwise direction) laevorotatory or the 1-form or negative – sign placed.

If the light is rotated towards right (clockwise direction) dextrorotatory or the d-form or positive + sign placed.

The spatial arrangement of four groups (valencies) around a central carbon is tetrahedral and if all the substituents attached to that carbon are different, such a carbon is called asymmetric carbon or stereocentre. 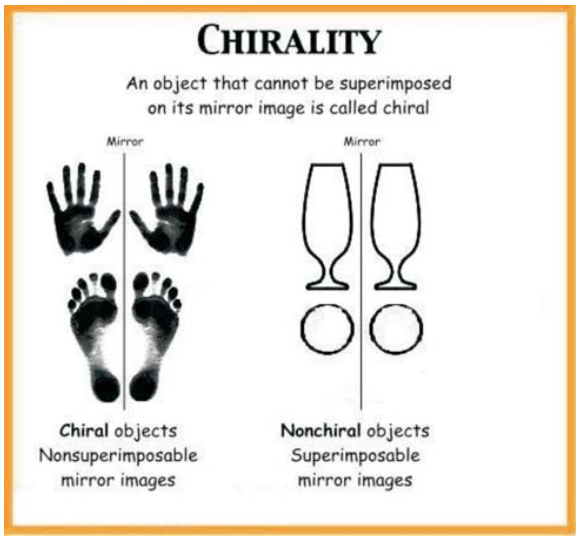 The stereoisomers related to each other as non-superimposable mirror images are called enantiomers.

Enantiomers possess identical physical properties namely, melting point, boiling point, solubility, refractive index, etc. They only differ with respect to the rotation of plane polarised light. If one of the enantiomer is dextrorotatory, the other will be laevorotatory.

There are three outcomes for a reaction at an asymmetric carbon atom. Consider the replacement of a group X by Y in the following reaction;

When a haloalkane with β-hydrogen atom is heated with alcoholic solution of potassium hydroxide, there is elimination of hydrogen atom from β-carbon and a halogen atom from the α-carbon atom resulting in the formation of an alkene. The reaction follows the Saytzeff rule which states that “In dehydrohalogenation reactions, the preferred product is that alkene which has the greater number of alkyl groups attached to the doubly bonded carbon atoms.”

Alkyl halides react with magnesium in the presence of dry ether to form corresponding alkyl magnesium halide which is also known as Grignard’s reagent.

Alkyl halides react with sodium to form an alkane with double number of carbon atom than that present in alkyl halide. This reaction is also known as Wurtz reaction.

Aryl halides are extremely less reactive towards nucleophilic substitution reactions due to the following reasons:

Aryl halides are almost unreactive towards nucleophilic substitution reaction. This is because of double character of C – X bond due to resonance. Therefore, it is difficult to remove X from C – X bond.

Difference in hybridisation of carbon atom in C-X bond:

Chlorobenzene can be converted into phenol by heating in aqueous sodium hydroxide solution at a temperature of 623K and a pressure of 300 atmospheres.

The presence of an electron withdrawing group (-NO2) at ortho- and para- positions increases the reactivity of haloarenes. 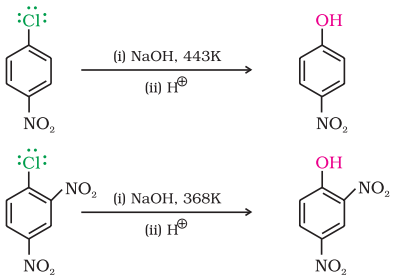 NO2 group increases the reactivity more when present at o- and p- position due to the increased delocalization of negative charge involving NO2 group. 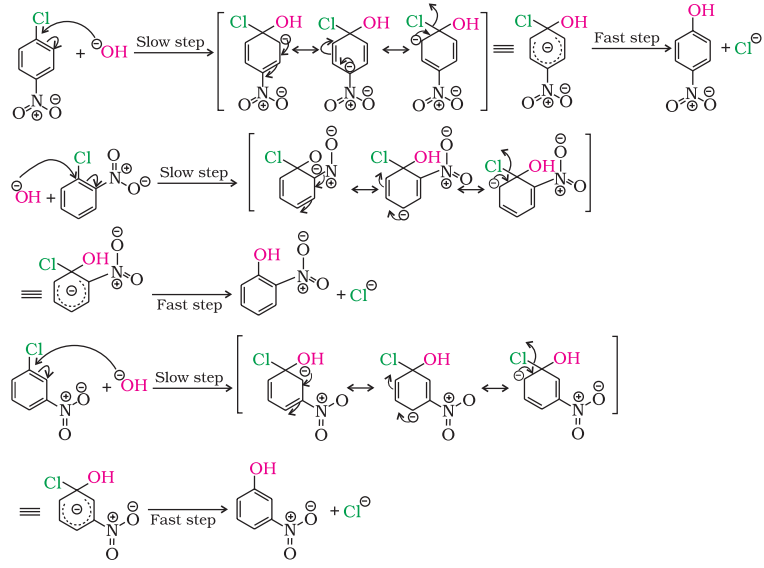 Haloarenes undergo the usual electrophilic reactions of the benzene ring such as halogenation, nitration, sulphonation and Friedel-Crafts reactions. Halogen atom besides being slightly deactivating is o, p directing; therefore, further substitution occurs at ortho- and para- positions with respect to the halogen atom. The o, p-directing influence of halogen atom can be easily understood if we consider the resonating structures of halobenzene as shown: 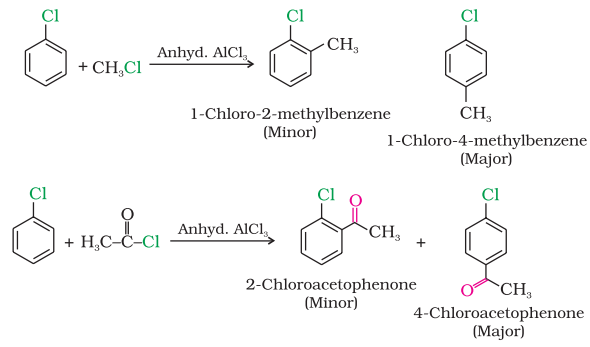 A mixture of an alkyl halide and aryl halide gives an alkylarene when treated with sodium in dry ether and is called Wurtz-Fittig reaction.

Aryl halides also give analogous compounds when treated with sodium in dry ether, in which two aryl groups are joined together. It is called Fittig reaction.