Spheres are arranged in a row with touching each other as shown below:

There are two possible ways to arrange spheres in two dimensions.

The sphere in the first row is exactly aligned with the sphere of the second row.

Spheres in the second row are fit in the depression of first row.

A 3-dimensional network is made by placing two 2-dimensional layers one above another. Therefore there are also two different ways to arrange the sphere in 3-dimension.

Sphere in the second layer is exactly placed above the first layer. 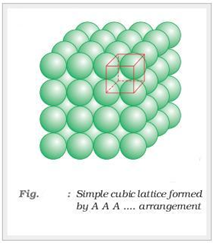 Spheres in the second row are fit in the depression of first layer.

Let the number of close packed spheres be N, then:

The alignment of second layer is different from first layer hence it is mentioned as layer B. two types of triangular voids are generated in this type of arrangement.

Triangular voids in first layer are covered by sphere of second layer. A regular tetrahedron is formed when centers of all 4 sphere is joined.