The experiment by Davisson’s and Germer’s provides experimental proof of the concept of wave nature of material particles.

The experimental arrangement used by Davisson and Germer is schematically shown in figure given below: 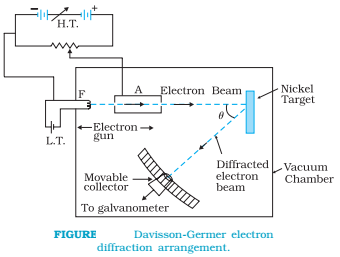 The appearance of the peak in a particular direction is due to the constructive interference of electrons scattered from different layers of the regularly spaced atoms of the crystals. From the electron diffraction measurements, the wavelength of matter waves was found to be 0.165 nm.