Diamagnetic substances are those which develop feeble magnetization in the opposite direction of the magnetizing field. Such substances are feebly repelied by magnets and tend to move from stronger to weaker parts of a magnetic field. 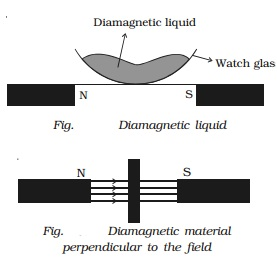 Diamagnetic substances are those in which the net magnetic moment of atoms is zero.