Dielectrics are non-conducting substances. In contrast to conductors, they have no or the negligible number of charge carriers. In a dielectric, free movement of charges is not possible. It turns out that the external field induces dipole moment by stretching or re-orienting molecules of the dielectric. The collective effect of all the molecular dipole moments is net charges on the surface of the dielectric which produce a field that opposes the external field. 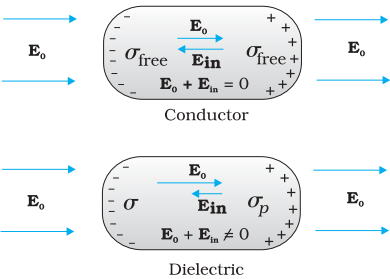 The difference in behavior of a conductor and a dielectric in an external electric field. 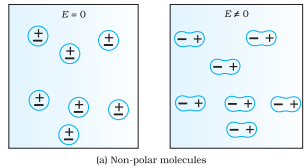 When the centre of positive and negative charges do not coincide because of the asymmetric shape of the molecules, e.g., NH3, HCL etc. 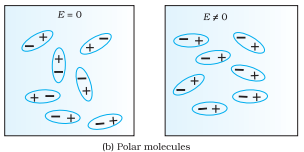 Thus in either case, whether polar or non-polar, a dielectric develops a net dipole moment in the presence of an external field. The dipole moment per unit volume is called polarisation and is denoted by P. For linear isotropic dielectrics