In an external electric field, they drift against the direction of the field. The positive ions made up of the nuclei and the bound electrons remain held in their fixed positions. In electrolytic conductors, the charge carriers are both positive and negative ions.

Important results regarding electrostatics of conductors.

where σ is the surface charge density and nˆ is a unit vector normal to the surface in the outward direction. 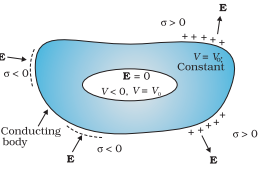