: A satellite is a body which is revolving continuously in an orbit around a comparatively much larger body.

The orbital speed of satellite is the speed required to put the satellite into given orbit around the earth.

A satellite which revolves around the earth with the same angular speed in the same direction as is done by the earth around its axis is called geostationary or geosynchronous satellite.

If the circular orbit is in the equatorial plane of the earth, such a satellite, having the same period as the period of rotation of the earth about its own axis would appear stationary viewed from a point on earth. The (RE + h) for this purpose works out to be large as compared to RE :

and for T = 24 hours, h works out to be 35800 km. which is much larger than RE. Satellites in a circular orbits around the earth in the equatorial plane with T = 24 hours are called Geostationary Satellites.

It is that satellite which revolves in the polar orbit around the earth, i.e., polar satellite passes through geographical north and south poles of the earth once per orbit. 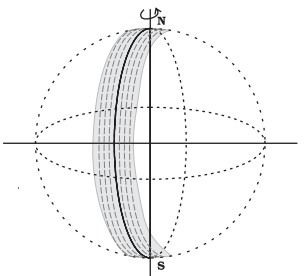 A Polar satellite: A strip on earth’s surface (shown shaded) is visible from the satellite during one cycle. For the next revolution of the satellite, the earth has rotated a little on its axis so that an adjacent strip becomes visible.

The escape speed on earth is defined as the minimum speed with which a body has to be projected vertically upwards from the surface of the earth( or any other planet ) so that it just crosses the gravitational field of the earth (or of that planet) and never returns on its own.

Escape velocity Ve is given by,

For a point close to the earth’s surface, the escape speed and orbital speed are related as

It is a situation in which the effective weight of the body becomes zero.