We know that central forces are conservative in nature i.e., work done on any particle moving under the influence of conservative forces does not depend on path taken by the particle but depends on initial and final positions of the particle.

Electrostatic force given by Coulomb’s law is also a central force like gravitational force and is conservative in nature.

For conservative forces, work done on particle undergoing displacement can be expressed in terms of the potential energy function.

where VP and VR are the electrostatic potentials at P and R, respectively.

Work done by an external force in bringing a unit positive charge from infinity to a point = electrostatic potential (V) at that point.

In other words, the electrostatic potential (V) at any point in a region with electrostatic field is the work done in bringing a unit positive charge (without acceleration) from infinity to that point.

Potential Due to a Point Charge

Consider a point charge Q at the origin. For Q > 0, the work done against the repulsive force on the test charge is positive. Choose a convenient path along the radial direction from infinity to the point P.

At some intermediate point P′ on the path, the electrostatic force on a unit positive charge is

where rˆ′ is the unit vector along OP′. Work done against this force from r′ to r′ + ∆r′ is

The negative sign appears because for ∆r′ < 0, ∆W is positive. Total work done (W) by the external force is obtained by integrating from r′ = ∞ to r′ = r,

This, by definition, is the potential at P due to the charge Q 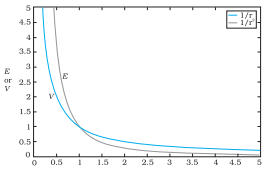 Potential Due to an Electric Dipole

Take the origin at the center of the dipole. Since the potential is related to the work done by the field, the electrostatic potential also follows the superposition principle. Thus, the potential due to the dipole is the sum of potentials due to the charges q and –q.

where r1 and r2 are the distance of the point from q and –q, respectively.

Using the Binomial theorem and retaining terms up to the first order in a/r; obtain,

Using Equations and p = 2qa, we get

where is the unit vector along the position vector OP. The electric potential of a dipole is then given by

The equation is approximately true only for distances large compared to the size of the dipole so that higher order terms in a/r are negligible. For a point dipole p at the origin,

Potential due to a system of charges

Consider a system of charges q1, q2,…, qn with position vectors r1, r2,…, rn relative to some origin. The potential V1 at P due to the charge q1 is

where r1P is the distance between q1  and P. Similarly, the potential V2 at P due to q2 and due to q are given by

where r2P and r3P are the distances of P from charges q2 and q3, respectively; and so on for the potential due to other charges.