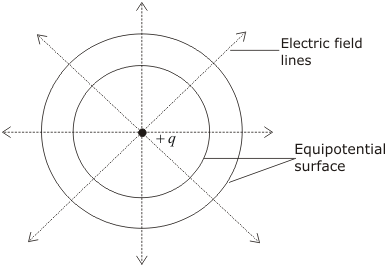 where r12 is the distance between q1 and q2.

Consider an electrostatic field E due to a charge Q placed at the origin. Now, bring a test charge q from a point R to a point P against the repulsive force on it due to the charge Q. This will happen if Q and q are either positive or both negative.

(Note here that this displacement is in an opposite sense to the electric force and hence work done by electric field is negative, i.e., –WRP.)

Therefore, can define electric potential energy difference between two points as the work required to be done by an external force in moving (without accelerating) charge q from one point to another for the electric field of any arbitrary charge configuration.

Two important comments may be made at this stage:

The potential energy of charge q at a point (in the presence of field due to any charge configuration) is the work done by the external force (equal and opposite to the electric force) in bringing the charge q from infinity to that point.