In solids, the atoms are arranged in a systematic space lattice and each atom is influenced by neighbouring atoms. The closeness of atoms results in the intermixing of electrons of neighbouring atoms. Due to this, the number of permissible energy levels increases.

Hence in the case of a solid, instead of a single energy level associated with a single atom, there will be bands of energy levels. A set of such closely packed energy levels is called an energy band. 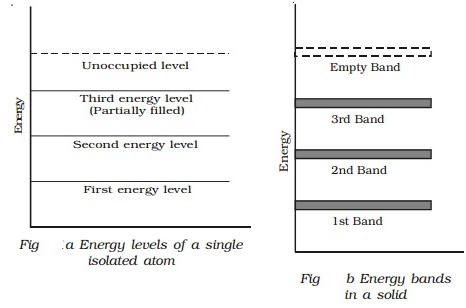 The concept of energy bands can be understood from Fig a and Fig b. The energy levels of a single isolated atom of silicon are shown in Fig a.