Light of different frequencies can be used by putting appropriate colored filter or colored glass in the path of light falling on the emitter C. The intensity of light is varied by changing the distance of the light source from the emitter.

Effect of intensity of light on photocurrent: 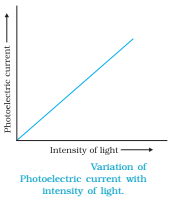 Effect of potential on photoelectric current: 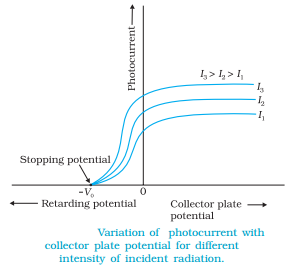 For a particular frequency of incident radiation, the minimum negative (retarding) potential V0 given to the plate A for which the photocurrent stops or becomes zero is called the cut-off or stopping potential.

In other words, the maximum kinetic energy of photoelectrons depends on the light source and the emitter plate material, but is independent of intensity of incident radiation.

Effect of frequency of incident radiation on stopping potential:

This implies that greater the frequency of incident light, greater is the maximum kinetic energy of the photoelectrons. Consequently, we need greater retarding potential to stop them completely. 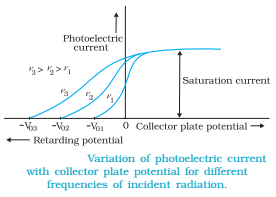 If we plot a graph between the frequency of incident radiation and the corresponding stopping potential for different metals we get a straight line, as shown in (fig. below) 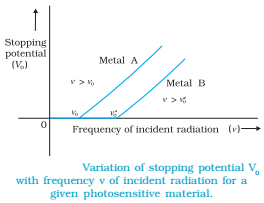 The graph shows that:

These observations have two implications: