Photoelectric effect is the phenomenon of emission of electrons by metals when illuminated by light of suitable frequency. Certain metals respond to ultraviolet light while others are sensitive even to the visible light. Photoelectric effect involves conversion of light energy into electrical energy. It follows the law of conservation of energy. The photoelectric emission is an instantaneous process and possesses certain special features.

Hertz observed that high voltage sparks across the detector loop were enhanced when the emitter plate was illuminated by ultraviolet light from an arc lamp.

Light shining on the metal surface somehow facilitated the escape of free, charged particles which we now know as electrons. 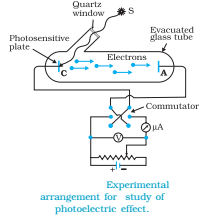 These observations indicate that when ultraviolet radiations fall on the emitter plate C, electrons are ejected from it which are attracted towards the positive, collector plate A by the electric field. The electrons flow through the evacuated glass tube, resulting in the current flow. Thus, light falling on the surface of the emitter causes current in the external circuit.

Hallwachs and Lenard studied how this photo current varied with collector plate potential, and with frequency and intensity of incident light.

Hallwachs, in 1888, undertook the study further and connected a negatively charged zinc plate to an electroscope.

After the discovery of electrons, these electrons were termed as photoelectrons. The phenomenon is called photoelectric effect.