Let us consider a conductor PQ of length l and area of cross section A. The conductor is placed in a uniform magnetic field of induction B making an angle θ with the field [Fig 3.22]. 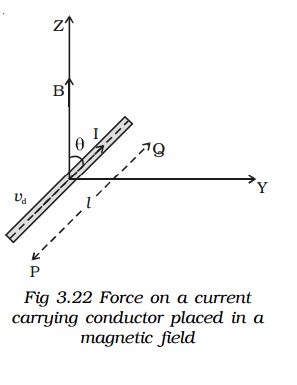 A current I flows along PQ. Hence, the electrons are drifted along QP with drift velocity vd. If n is the number of free electrons per unit volume in the conductor, then the current is

Multiplying both sides by the length l of the conductor,

Since the electrons move under the influence of magnetic field, the magnetic lorentz force on a moving electron.

The negative sign indicates that the charge of the electron is negative.

The number of free electrons in the conductor

The magnetic Lorentz force on all the moving free electrons

Substituting eq (2) and (3) in the above equation

This total force on all the moving free electrons is the force on the current carrying conductor placed in the magnetic field.

Magnitude of the force

The direction of the force on a current carrying conductor placed in a magnetic field is given by Fleming’s Left Hand Rule.

Force on a current carrying conductor placed in a magnetic field