Moving coil galvanometer is a device used for measuring the current in a circuit. 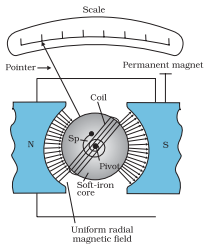 Fig. The moving coil galvanometer. Its elements are described in the text. Depending on the requirement, this device can be used as a current detector or for measuring the value of the current (ammeter) or voltage (voltmeter)

Principle: Moving coil galvanometer works on the principle that a current carrying coil placed in a magnetic field experiences a torque

Construction: It consists of a rectangular coil of a large number of turns of thin insulated copper wire wound over a light metallic frame (Fig 3.26). The coil is suspended between the pole pieces of a horse-shoe magnet by a fine phosphor bronze strip from a movable torsion head. The lower end of the coil is connected to a hair spring (HS) of phosphor bronze having only a few turns. The other end of the spring is connected to a binding screw. A soft iron cylinder is placed symmetrically inside the coil. The hemispherical magnetic poles produce a radial magnetic field in which the plane of the coil is parallel to the magnetic field in all its positions (Fig 3.27). A small plane mirror (m) attached to the suspension wire is used along with a lamp and scale arrangement to measure the deflection of the coil.

Force on PQ, F = BI (PQ) = BIl. According to Fleming’s left hand rule, this force is normal to the plane of the coil and acts outwards. 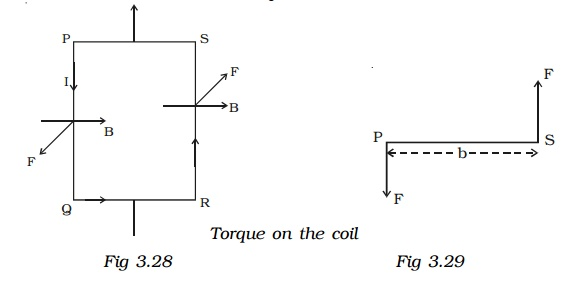 This force is normal to the plane of the coil and acts inwards. These two equal, oppositely directed parallel forces having different lines of action constitute a couple and deflect the coil. If there are n turns in the coil,

moment of the deflecting couple = nBIA

When the coil deflects, the suspension wire is twisted. On account of elasticity, a restoring couple is set up in the wire. This couple is proportional to the twist. If θ is the angular twist, then,

moment of the restoring couple = Cθ

where C is the restoring couple per unit twist

i.e I α θ. Since the deflection is directly proportional to the current flowing through the coil, the scale is linear and is calibrated to give directly the value of the current.

The suspended coil galvanometers are very sensitive. They can measure current of the order of 10-8 ampere. Hence these galvanometers have to be carefully handled. So, in the laboratory, for experiments like Wheatstone’s bridge, where sensitivity is not required, pointer type galvanometers are used. In this type of galvanometer, the coil is pivoted on ball bearings. A lighter aluminum pointer attached to the coil moves over a scale when current is passed. The restoring couple is provided by a spring.

Current sensitivity of a Galvanometer

The current sensitivity of a galvanometer can be increased by

Voltage sensitivity of a Galvanometer

The  voltage  sensitivity  of  a  galvanometer  is  defined  as  the deflection per unit voltage.

where G is the galvanometer resistance.

Conversion of Galvanometer into an ammeter 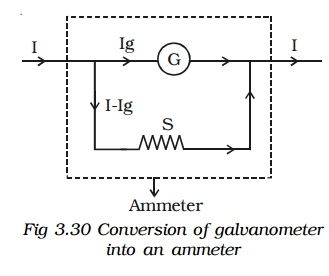 Current in the circuit = I

∴ Current through the shunt resistance = Is = (I-Ig)

Since the galvanometer and shunt resistance are parallel, potential is common.

The shunt resistance is very small because Ig is only a fraction of I.

Conversion of Galvanometer into a voltmeter

Voltmeter is an instrument used to measure potential difference between the two ends of a current carrying conductor. A galvanometer can be converted into a voltmeter by connecting a high resistance in series with it. The scale is calibrated in volt. The value of the resistance connected in series decides the range of the voltmeter. 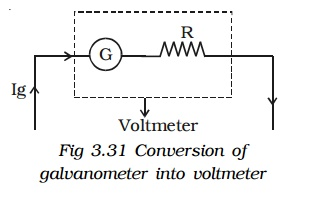 Resistance to be connected in series = R

From the equation the resistance to be connected in series with the galvanometer is calculated.

The effective resistance of the voltmeter is