If a body, capable of oscillation, is slightly displaced from its position of equilibrium and left to itself, it starts oscillating with a frequency of its own. Such oscillations are called free oscillations. The frequency with which a body oscillates freely is called natural frequency and is given by 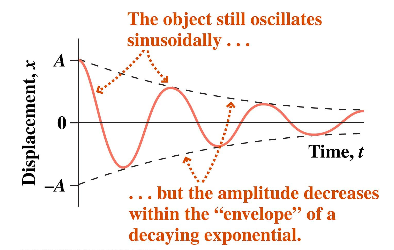 If the damping force is given by

The amplitude of the damped S.H.M. is

where a is the amplitude of undamped S.H.M. Clearly, a’ decrease exponentially with time.

The angular frequency of the damped oscillator is

Clearly, damping increases the time period (due to the presence of the term b2/4m2 in the denominator).

As damping constant, b= F/v