An ideal simple pendulum consists of a point-mass suspended by a flexible, inelastic and weightless string from a rigid support of infinite mass.

In practice, a simple pendulum is obtained by suspending a small metal bob by a long and fine cotton thread about a rigid support. 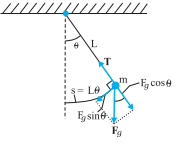 Fig. Force acting on the bob of a pendulum

In the equilibrium position, the bob of a simple pendulum lies vertically below the point of suspension. If the bob is slightly displaced on either side and released, it begins to oscillate about the mean position.

where the negative the negative sign indicates that the torque acts to reduce θ, and L is the length of the moment arm of the force Fg sin θ about the pivot point.

Where I is the pendulum’s rotational inertia about the pivot point and α is its angular acceleration about that point.

Substituting the magnitude of Fg i.e. mg, we have,

If we assume that the displacement θ is small. where θ is in radians. So, sinθ can be approx. by θ

The motion of a simple pendulum swinging through small angles is approximately SHM.

All the mass of a simple pendulum is centered in the mass m of the bob, which is at a radius of L from the pivot point. Therefore, for this system, we can write I = mL2

Put it in the equation of time:

It represents a simple expression for the time period of a simple pendulum.