The property by virtue of which the relative motion between two surfaces in contact is opposed is known as friction.

Tangential forces developed between the two surfaces in contact, so as to oppose their relative motion are known as frictional forces or commonly friction.

Frictional forces are of three types:-

Let us return to the example of a body of mass m at rest on a horizontal table. The force of gravity (mg) is cancelled by the normal reaction force (N) of the table. Now suppose a force F is applied horizontally to the body. We know from experience that a small applied force may not be enough to move the body. But if the applied force F were the only external force on the body, it must move with acceleration F/m, however small. Clearly, the body remains at rest because some other force comes into play in the horizontal direction and opposes the applied force F, resulting in zero net force on the body. This force fs parallel to the surface of the body in contact with the table is known as frictional force, or simply friction.

In this fig. , Static and sliding friction: (a) Impending motion of the body is opposed by static friction. When external force exceeds the maximum limit of static friction, the body begins to move.

Minimum value of static frictional force is zero in the condition when the bodies are relatively at rest and no external force is acting to move them relatively.

?s = constant of proportionality depending only on the nature of the surfaces in contact. The constant ?s is called the coefficient of static friction.

Maximum value of static frictional force is µsN in the condition when the bodies are just about to move relatively under the effect of external applied force. 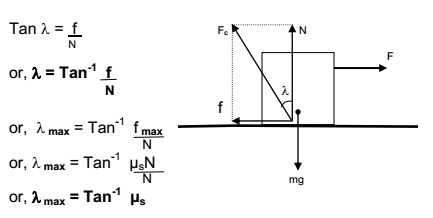 The angle of the inclined plane at which a body placed on it just begins to slide is known as angle of repose.

Perpendicular to the plane N = mgCosθ (since body is at rest)

Parallel to the plane when body is at rest mgSinθ = fs 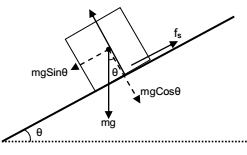 When body is just about to slide

Note: Angle of repose is equal to the maximum value of angle of friction 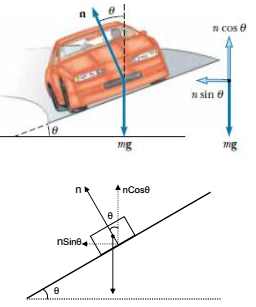 The acceleration of a body moving in a circle of radius R with uniform speed v is v2/R directed towards the centre. According to the second law, the force f providing this acceleration is:

where m is the mass of the body. This force directed forwards the centre is called the centripetal force.