Law of Conservation of Momentum:

The total momentum of an isolated system of particles is conserved. The law follows from the second and third law of motion.

Explain with an example: An important example of the application of the law of conservation of momentum is the collision of two bodies. Consider two bodies A and B, with initial momenta pA and pB. The bodies collide; get apart, with final momenta p′A and p′B respectively. By the Second Law

(Where we have taken a common interval of time for both forces i.e. the time for which the two bodies are in contact.)
Since FAB = -FBA by the third law.

It is defined as the quantity of motion contained in the body. Mathematically it is given by the product of mass and velocity. It is a vector quantity represented by p.

The principle of Conservation of Linear Momentum:

It states that in the absence of any external applied force total momentum of a system remains conserved. 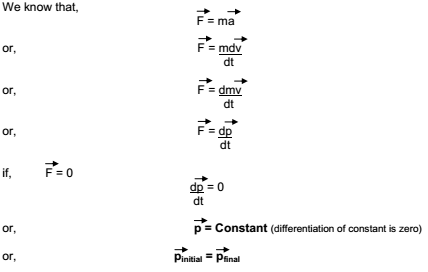 Let mass of gun be mg and that of bullet be mb.
Initially both are at rest, hence their initial momentum is zero.

Since there is no external applied force, from the principal of conservation of linear momentum

Equilibrium of a particle:

Equilibrium of a particle in mechanics refers to the situation when the net external force on the particle is zero. According to the first law, this means that the particle is either at rest or in uniform motion.

If two forces F1 and F2, act on a particle, equilibrium requires

i.e. the two forces on the particle must be equal and opposite.

If the numbers of forces act at the same point, they are called concurrent forces. The condition or the given body to be in equilibrium under the number of forces acting on the body is that these forces should produce zero resultant.

The resultant of the concurrent forces acting on a body will be zero if they can be represented completely by the sides of a closed polygon taken in order. 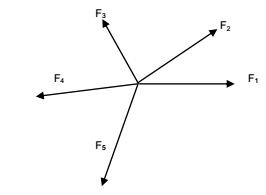