Heat is a form of energy that flows between a body and its surrounding medium by virtue of temperature difference between them. The degree of hotness of the body is quantitatively represented by temperature.

Heat or thermal energy of a body is the sum of kinetic energies of all its constituent particles, on account of translational, vibration and rotational motion. 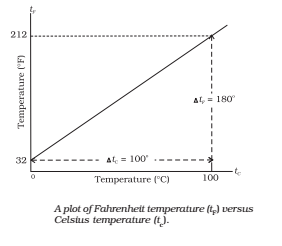 Relation between Different Scales of Temperatures

Differences between Heat and Temperature: