The transition metals form a large number of complex compounds in which the metal atoms are bound to a number of anions or neutral molecules. In modern terminology such compounds are called coordination compounds.

The first systematic attempt at explaining the formation, reactions, structure and bonding of a coordination compound was made by A. Werner. The main postulates are:

Difference between a double salt and a complex salt

A Co-ordination compound consists of a ligand, central atom, complex ion, a cation or an anion. The complex ion is generally written in a square box and the ion (cation or anion) is written outside complex ion.

Where: M is the central metal atom/ion
L is the ligand
A is the cation
B is the anion

It is the central metal atom or ion which is bonded to a definite number of ions or molecules which is fixed. For example, in [Co(NH3)6]Cl3, a coordination entity, six ammonia molecules are surrounded by three chloride ions.

A coordination polyhedron is the spatial arrangement of the ligand atoms that are directly attached to the central atom/ion. For example, [Co(NH3)6]3+ is octahedral, [Ni(CO)4] is tetrahedral and [PtCl4]2 is square planar.

It is defined as the charge that the central metal ion would carry if all the ligands are removed along with electron pairs.
It is calculate as follows: 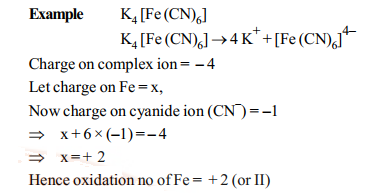